Talk about false alarms! What a day I had yesterday...

Regular readers will know I encourage patients to learn as much as they can about their disease and their treatment.  This is, generally, a good thing.  But sometimes, when you know just enough to be dangerous, it can have unintended consequences.

Regular readers will also know that my aggressive treatment plan for the disease has been in pursuit of a cure.  Looking back five years ago (I was diagnosed in October of 2008, so at this time five years ago I had a pain in my shoulder that was a tumor and I had raging disease but no idea) I had two options, really.  Option one was to treat the disease sequentially, hoping for a good response to each successful drug cocktail, until I ran out of combinations that worked, at which point I would have drug-resistant disease and a poor prognosis.  Option two was to clobber the disease with everything at once, hoping for a cure, and if it failed I would end up with drug-resistant disease and a poor prognosis.

I went for option two and I'm glad I did.  While it has meant prolonged treatment, I have had four years of continuous complete remission this month.  And while complete remission may not mean a cure in every case, there's no doubt that there can't be cure WITHOUT it so at the very least it's a positive sign that my remission is profound.

Nonetheless, if I *lose* remission, it's a dreadful thing.  It's not the same thing as somebody who DIDN'T pursue a cure losing remission, because most people with low-risk disease that achieve complete remission in Total Therapy DON'T lose it.  Most are cured (the exact percentage is debatable and will be proven out over time).

The downside is if remission *IS* lost, it means drug-resistant disease.  And it often returns in a high-risk variant.  Oh, sure, a couple of new drugs (Kyprolis/Carfilzomib and Pomalyst/Pomalidomide) have come out in the last five years and they can extend life by a little bit but at 45, I'm not looking for a little bit.

So every six months, when I check in and the remission has sustained, I'm closer to being confident that I'm cured.  And if it's lost, then it's pretty dire.

So this dynamic, and my acute awareness of it, sets the stage for an episode of panic yesterday that thankfully has a benign ending.

After last week's visit when I wasn't able to meet with BB because his rounds had him later than usual, I was a little uneasy about those residual lesions not fully resolving yet, and the monoclonal signature in my blood which is either a sign of profound remission and recovering marrow, or a sign of return of the disease.  The fact that my bone marrow was negative for residual disease was definitely encouraging and lends credence to the fact that the blood is a non-issue, but I'm still eager to have those damn lesions resolve so that I can feel confident I've beaten this thing once and for all.

I got my paperwork Monday via Fedex and perused it.   Put me back on Zometa for bone strengthening.  Come back in January for two fine needle aspirations (of the T10 and T12 vertebrae, for those playing along with the home version of the game).   Seemed like low grade stress at most.  All tests were negative.

Then yesterday morning a dear friend called and said he was sorry to hear the news.  I thought he was taking yesterday's blog post a bit hard.

Then I found out that my wife had informed him I had lost remission.

I then calmly told my wife that wasn't the case.

Then she texted me a photo of something on the paperwork.  A tiny little check-the-box thing that I hadn't even looked at because it has been so rote for the past four years.  Of COURSE I'm in remission, right?

Except that's not what it said.  Instead, it looked like this: 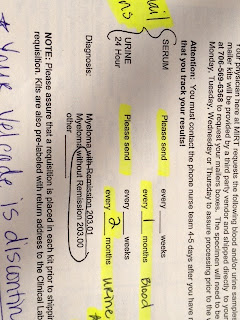 Forgive the rotation of the photo, but you get the point.   The big circle around "without Remission" was the scary thing.

My wife had thought I was aware of this due to my consternation at the need for more bone marrow work and the mysterious blood results.  So she hadn't said anything to me, thinking I already knew.

I texted BB (thank God I have a direct line) and said "Paperwork says I have lost remission.  Is this true?"

I also texted his chief administrator BJ, and my PA who is named JA after my former PA (CR) moved on from UAMS to other pastures.  Sorry for the overload of initials, by the way.

While I was waiting, it occurred to me that I thought there were other places that indicated with a check box what my diagnosis was.  I called my wife and had her pore through the papers for it.  We couldn't find it.  The closest thing we could find was this, in indecipherable doctor script: 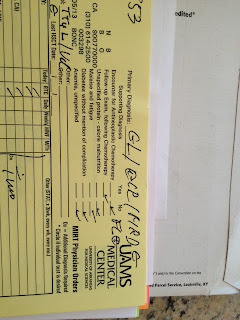 About all I can make out of that is...uh...nothing whatsoever.  In the cold light of day today, GL probably means IgG Lambda.  Then there's a symbol that could mean "with" or "without" followed by CR.  Again, in the cold light of day, what I thought was GIRD with a weird symbol is really MRD negative.   Then underneath it is a FL with a plus sign and in the cold light of day that probably means focal lesions still persist.   So, dammit, I figured it all out, a day later.  Except I still wouldn't know whether that symbol meant in complete remission or not.  And even then, they wouldn't say that "complete remission" has been lost -- they would say "remission" has been lost.  So any mention of CR has to be a positive thing.

No need to panic after all.  This could have allayed my fears.  However, dear reader, I can assure you that adrenaline was interfering with this simple analysis.

He confirmed it was a transcription error.  BJ later emailed me the same thing.

I was in a bit of a daze the rest of the day -- if the cancer doesn't get me, I might have a heart attack from that kind of stress!  :)

There's probably a lesson here about just living each day and enjoying it for the gift that it is.  That, too, is something that is easier to recognize when you aren't in the heat of it, believe me.

So for now, steady as she goes.  I'll be back in January to have my spine poked and that will hopefully tell us more -- unless, of course, the Zometa helps those lesions resolve fully by then.  It's worth noting that many doctors don't think these things ever go away...but then I didn't go to just any doctor.  :)
Posted by Nick at 9:33 AM 3 comments: