Two unrelated little things, which we'll do in reverse order.

I will be getting IVIG a week from Tuesday, along with Velcade, both administered by Dr. G at UCLA's hospital. IVIG is evidently a money loser as an infusion unless it can be done in a hospital where other services are provided and charged for. I'll be getting my Velcade done then as well. The IVIG is a SIX HOUR infusion so it's gonna be a long, dull day for the kid.

I am off Revlimid this week, so I am not taking the magnesium supplements. So far, no leg cramps. I'll go back on them when I resume Revlimid on Tuesday. Hopefully my counts can recover a bit this week -- WBC, HGB and Platelets are all lower than I'd like.

Now, as for the dime-sized black spots on my butt, I figured it was time to do something about them or at least look into the situation. My first bone marrow biopsy was done by Dr. SH in Beverly Hills and it left no mark. Subsequent to that, between bone marrows and gene arrays and fine needle aspirates I have probably ten black spots on my butt. It's not the end of the world, but I also look (as I've said before) that I went hunting with Dick Cheney and he unloaded a bunch of buckshot in my backside.

The dermatologist told me there are pigmentation issues with these scars and prescribed a bleaching cream that can be used to touch them up. He also noticed there are indentations in these areas, which can be filled in. I thought I'd try to clear up the color first, since that sounded less invasive. So I bought some goop and we'll see if that does the trick. A thousand words will have to suffice in lieu of a picture, I'm afraid.

Closing this back around to Dr. G at UCLA, I spoke with him a bit about my therapy. He said that regardless of whether or not I was cured, I was in "a very good place." Now, he is a general Hem / Onc (probably less Hem than Onc) so he's not a Myeloma specialist per se, so frankly his opinion isn't worth all that much in terms of illuminating the nuances of my therapeutic choices and their ramifications. But it's all good at this point. I find myself checking the most recent slide from Arkansas that appeals: 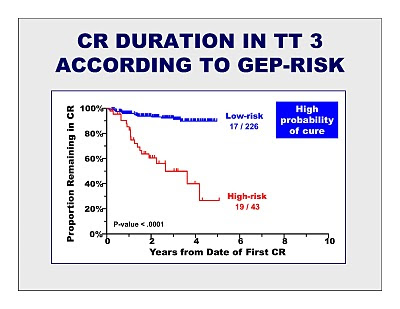 Which brings me to the following chart: 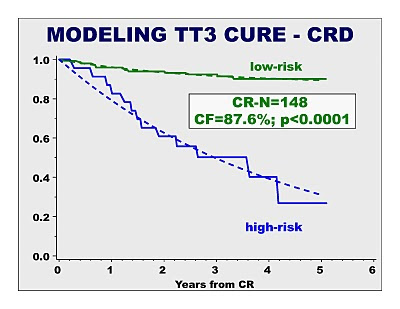 Fitting these to a regression curve, the cure fraction for low-risk patients that achieve complete response is 87.6%.  And the farther one is out on that curve, the better the odds are.

Very good news for this sub-group of patients.

This chart, unfortunately, also points out the tremendous amount of work remaining to help those with genomically-defined high risk disease -- as well as those who lose remission despite having a low-risk signature.  Fortunately new classes of drugs are coming out that will hopefully tell a much brighter story for Myeloma sufferers!
Posted by Nick at 12:54 PM 5 comments: