I received a comment with some good questions about the previous post from the husband of a patient battling MM, and wanted to elaborate a bit on the points I made. Please bear in mind, I am a patient, albeit an educated one, but I am not a hematoloogist or medicial clinician, so take these comments as any more definitive than an interesting jumping off point for discussing them with qualified professionals to help you form your opinion.

So, to the questions:

Answer: I was talking discussing this with my wife this morning (without realizing you had asked) under the heading of "why isn't everybody doing this yet." I am sure the data is out there, and eventually BB or others will probably show it to prove more definitively that his program works. He has gene array information from the people that get tested there initially and choose to go elsewhere...it would be a matter of tracking these people to see how they fare from other treatment, and then separating those out into low versus high risk groups. Right now, on a blended basis, BB believes he can cure 74% of newly-diagnosed patients with the current protocols. The highest official figure I have heard from anybody else (with the possible exception of BB's former colleague in Utah) is 0%. That's good enough for me. Until I hear another doctor, with data to support his contention, that he can cure, say, 30% of his patients that are newly diagnosed, there's not really anything to compare to. Other people don't believe BB is able to really achieve these results. Total Therapy's results have really only been around for 2-3 years. Eventually, one hopes they will catch on.

Answer: I don't disagree with you that people should take better care of their health. Bear in mind, MM patients in BB's clinic are not told to stop drinking any alcohol, become a vegan, or anything like that. He counsels people to remain in good physical shape, as any physician would, because obesity is a problem for EVERYTHING. 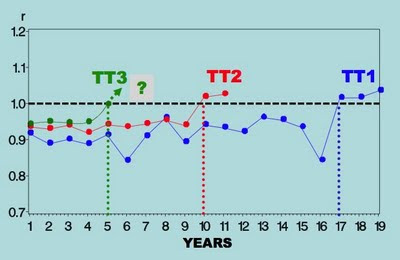 The horizontal line at 1.0 is the expected survival of the general population. You can see in Total Therapy 1, lower survival until 15 years or so. But somebody who went through Total Therapy 1 and lived for 15 years actually had a higher chance of being alive than somebody who didn't have myeloma. This is a long-term view, to be sure. But look at Total Therapy 3 -- if you make it five years (and recall, 90% of low-risk TT3 patients are in complete remission after five years at this point) you are in line with the general population, and based on the experience of both TT1 and TT2 should be superior (although the data doesn't exist yet as TT3 is only five years old).

Question 3: In number 3 I am not sure how 5 years of statistics can prove something beyond 5 years. If you live 7 years beyond start of treatment and die of another cause is that a cure? But, you would need more than 5 years of statistics. I assume the 5 years may be the collection period and it includes patients with more than 5 years of data. Do you know what percentage would be for one of the other popular treatment methods with low risk myeloma patients?

I'll answer in several parts. Without going into too much detail, if you have a trend of information for five years and it correlates with other variables, you can perform a statistical analysis called a regression that allows you to extrapolate additional information over time. Taking a very, very simple example, if you knew that 2 years ago your mortgage payment was $1,000 a month, and a year ago it was $950 a month, and this year it is $900 a month, you could accurately predict that in two years it would be $800 a month. Obviously, the Myeloma data is much more complicated than this, but the same statistical tools work with it.

If you live 7 years beyond treatment and die of another cause, in BB's data, you are counted as a fatality. Thus, to be a survivor, you have to have survived everything. That makes these statistics all the more impressive. 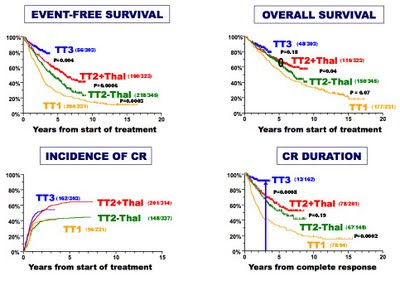 This graph shows both low and high risk myeloma patients. The gold standard chart is event-free survival, which shows that after five years out, close to 80% of all TT3 folks are still alive. Compare with, over time, the survival rates of TT1 (around 25% at five years, TT2 without thalidomide (around 40%), TT2 with thalidomide (around 60%), etc. You can see the shape of the curves are relatively predictable. They key is where that plateau forms -- plateau meaning that beyond that point, if you haven't had recurrent myeloma, it won't be coming back. BB currently believes this is around 72 months from starting treatment.

For low risk disease, the data is even better.

As for the percentage survival rate for other types of therapy, nobody keeps statistics because nobody else believes the disease is curable. I was flat out told by my first hematologist, who did ultimately suggest I check out Arkansas, that he did not believe transplant even prolonged life, much less cured the disease. He is still an advocate of a transplant only because that means you can go off all therapy -- until it comes back. So they don't bother tracking this. I only know this: while the data looks back five years, so doesn't reflect the full benefit of Velcade, the American Cancer Society published last year that five year survival is 34%. Some of those people get poor care, but some also get Total Therapy. So to interpolate from that, overall survival from other methods has to be a hell of a lot lower than Total Therapy. New drugs, such as Carfilzomib and Pomalidomide, may change the game when they come out in a few years but nobody is talking about them like a cure.

Question: In number 4 are you saying the average age at diagnosis of low risk myeloma patients receiving TT3 are 71 years old. I thought it was the young and healthy myeloma patient recommended for this treatment method.

This data comes from different places. I recall hearing that the median (not to say the average) age at diagnosis of Myeloma overall was 71, however I suspect this is coming down into the 60s as more and more young people are getting the disease. BB will transplant people older than 71 and has been doing this for some time. It is another area of disagreement between him and other doctors. Here, I tend to be political correct and shy away from strongly suggesting that an older person dive into this program because (a) they might be sick from something else, (b) the treatment is not a lot of fun, and (c) there is an increased treatment-related mortality from treatment as age advances -- perhaps 3% or so. This is not trivial, but compare that against 70% mortality from the disease itself over a five year timeframe and it starts to come into focus. It's an individual choice, of course. In the case of your wife, I would probably at least get a second opinion from a myeloma specialist (if not BB himself) to discuss transplant. The woman I first consulted about Total Therapy was a patient, now cured, who was in her late 50s when she received treatment and was transplanted despite the fact that she had lupus. So he is more aggressive in transplantation than are most places.

I hope these answers are useful to you, and to your wife, as you navigate your own way through your battle. There is more hope than ever for Myeloma patients, whether it is through the Arkansas approach or through the variety of new and effective drugs that have come on the market in the last five years, and which are continuing to be developed. I hope that you have many long healthy and happy years ahead of you both.
Posted by Nick at 7:24 AM 4 comments: