Quick update on a few things...

Well, we got started on the will and trust for the kids today. Overdue, and not exactly uplifting, but I felt very responsible when we finished our meeting with the attorney. If only I'd gotten that damn long-term disability I'd feel like the most responsible guy in town.

I spoke with Dr. PZ, my primary physician who got this whole mess started when he was smart enough to chase down the meaning of that protein back in early November. He said that he had looked at protein levels in the past, and they had never been elevated. So there goes the theory that the MM raised my cholesterol. On the other hand, he was fully supportive of stopping Lipitor, so I'm now off that. He was also supportive of reducing alcohol consumption (very few doctors actually suggest you drink MORE... 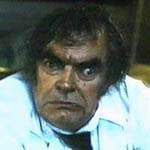 ...other than perhaps Jack Elam's character in Cannonball Run). Hopefully I won't meet anybody at BB's clinic that resembles him. I scoured the Internet for a bigger picture that showed off his stethoscope but couldn't find anything. You'll have to use your imagination but I assure you, he's wearing a medical coat.

Anyhow, so no Lipitor, reduced alcohol and I am considering taking milk thistle extract in order to help the liver get into tip-top shape before and during chemo. Even if I discontinue it during the chemo, I will probably use it for the next month or so to help the liver get strong. PinnacleCare is looking into the one clinical trial I found out (comparing two groups in treatment for leukemia to see which group -- the one on the extract or the one on a placebo -- better manages liver damage from the chemo).

I started telling folks at work today, and they were very supportive. I'm about to click "send" on a letter to the CEO. I'm working on a lot of projects and I'm gonna be out of commission for several months -- I don't want him to think I just vanished without a trace!