Transplant B, Day 0: Did somebody get the number of that bus...

I forgot how much this takes outtaya, red blood counts be damned (mine are down to 10.8 at this point...by the way, I track red blood count in Hemoglobin...my actual RBC is between 3 and 4, which is low, but Hemoglobin needs to stay about 8 otherwise I need an infusion, so that's the number I look at).

Got my stem cells today. 7.9 million of them, versus 3.9 million last time. This leaves me with about 17 million more -- enough for three transplants or so, not that I'll think I'll ever need them. I asked about them giving me more in an effort to speed engraftment but they said it makes no difference. They usually give more the second time, and anything beyond that is just kinda picking out a bag and seeing how many cells are in it (I got two bags). I compared this to going to the grocer and wanting 1.5 pounds of good quality tuna steak and seeing how many filets of different sizes it takes to get to the right total weight. There was at least dim recognition in the eyes of the nurse so I gather the metaphor translated.

My kidneys are not doing a good job of retaining Potassium, so the two infusers I had yesterday must be repeated. They also gave me a pill (Spironolactone) that is supposed to encourage the kidneys to retain potassium rather than pee it all away, so I'll add back one more pill to the (thankfully) dwindling regimen. I'm down to the antifungal, antiviral, antibiotic, antiflu and now anti-peeing-out-potassium.

After the transplant, my heart rate was 120 and my blood pressure was around 165 over 97. They kept me for a couple of hours to monitor this, but at the end of the day it's all the damn fluid retension from the Dex. I'm up FIFTEEN POUNDS in five days. Ugh. Soon, I'll be peeing all this out but in the meantime my ankles are so swollen it hurts to wear shoes and I can barely move around. I feel like the guy at the end of the Monty Python sketch where he's eaten too much and is swelling to the point of bursting. Or, rather, one of the Thunders from Big Trouble in Little China who just expands until he explodes. 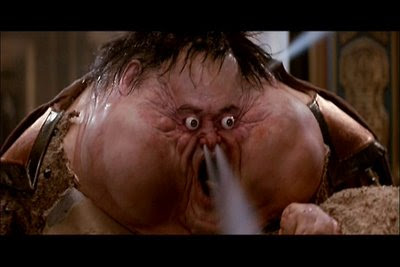 Anyhow, hopefully that is temporary.

Other than the potassium, the transitory high blood pressure, and the utter exhaustion, I feel pretty good, all things considered. For those interested in poop, I'll be discontinuing the Senna -- bracing myself for diarrhea at this point. I have to say, I went back and read all that stuff I wrote while I was doped up on Dilaudid and it's pretty damn funny but I'm not sure I'm going to have too many more Merciless Turds from Outer Space stories on here, so those yucks may be behind us. I'll have to find more fertile ground for humor. It's getting harder, though...people here are so nice and devoted to my care that it's not that easy to mock them relentlessly. :)

On the subject of sweet sentiment, we were treated to a very nice moment today. I was wearing a shirt given to me by the good people at PinnacleCare that reads "Cancer Sucks." Seemed like an appropriate "stick it to the man" type thing to wear on such an auspicious day as my second stem cell transplant. Jill and I went out to lunch at an upscale burger joint called Cheers, since I still have white cells and soon I'll be under bubble-boy lockdown in the apartment so we're enjoying the ability to go out when we can. We had finished our lunch when we were told that a nice young couple with their young son sitting outside had paid our tab.

We went out and spoke with this lovely couple from Chicago for about 20 minutes. Lance had been treated here for Myeloma, after diagnosis in his early 30s. He began treatment elsewhere and it didn't take, so he came here and went off protocol, did SuperBeam plus some very strong Velcade therapy, but it wiped out the Myeloma. He and his wife were dining once and had their tab paid for by others under similar circumstances and decided to keep the good will / karmic wheel rolling. Jill and I were very, very touched and will keep this in mind -- sooner or later there'll be a similar opportunity. I thought back to when I gave the guy that cut my hair some money to pay for a child that couldn't afford it...that time of thing is a small gesture but very meaningful when you are on the receiving end of it.

Lance had only great things to say about his experience in Arkansas and the state of his immune system post-transplant, which is something I've been modestly curious about since KG of the MMRF had told me her immune system was never the same. Lance used to have allergies and no longer does, is almost never sick, and was informed by BB that once somebody has beaten MM on the Arkansas protocol, their life expectancy is actually LONGER than the average person at large because the immune system has been reset so effectively. BB told Lance he has seen hypertension go away, all sorts of other immunodeficiency problems go away, etc. The fact that people are being checked frequently for three years is also a factor, I'm sure.

In all, a great day...but I am bushed and back to bed now. Looking forward to a visit from my friend Geoff tomorrow, while Jill will get to pop back to LA to see the kiddies. Geoff, I hope I have the stamina to get off the couch while you are here!
Posted by Nick at 3:08 PM 3 comments: