A few important facts and figures from BB's data

Based on a number of conversations and excellent questions from friends, I wanted to share a little bit of data that should give you some idea of why I am prepared, if need be, to move to Arkansas for treatment, and why I'm going to subject myself to treatment that many people in the medical community regard to be brutal or overkill.

BB presented to the American Society of Clinical Oncologists in 2008 with, as I think I mentioned elsewhere, a presentation entitled "The Myth of Incurability." That presentation can be downloaded in PDF form here for those interested in seeing all of it. It is data rich but if you are used to statistics and interpreting graphs, you'll probably get a good amount of it. I got about half of it upon first reading but now I'm so familiar with the acronyms that I get the point of the whole thing.

Anyhow there are a several charts I want to show you (shades of Ross Perot in 1992, was it?).

First, some background. The concept of "Total Therapy" was first introduced in the treatment of acute lymphoblastic leukemia in children. It refers to the notion of using all known effective treatment at once (colloquially I've referred to this as the "kitchen sink" approach) versus starting with one set of drugs, then moving to a stronger set of drugs once the disease overcomes the first, etc.

The first chart shows the results of this therapy over 45 years, in six major "groups" of study, each reflected in a line on the graph. 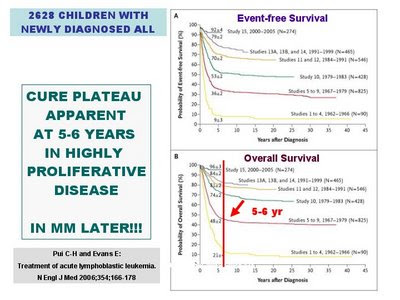 By the way, you can click on these charts to expand them -- they tend to be pretty small.

On these charts, the Y-axis is the % of survival, and the X-axis is time. There are several things one can take from this slide, but for our purposes the most important thing to note is that after 5-6 years from diagnosis, if you're gonna die, you're gonna die (presumably with your boots on...Iron Maiden song reference there for my 3 friends who listen to that music).

The lyrics of British heavy metal bands aside, you'll note that the curves "plateau" after about 5-6 years. Meaning if you've made it that far, chances are you have beaten the disease the the likelihood of recurrence is pretty low. Overall Survival is of course the gold standard, but at this point I am shooting for the higher bar of Event-free Survival, which means there is no trace of the disease.

NOW...BB saw this data from St. Jude's Children's Research Hospital and began applying the same theory about 20 years ago for MM. Since that time he has had three major studies (versus the six shown on these pages). They are called Total Therapy 1, Total Therapy 2, and (obviously) Total Therapy 3.

Bear in mind the Leukemia & Lymphoma Association still says that median survival is 5 years from diagnosis (meaning 50% of people are dead from the disease by this point). But get a load of BB's results in the charts below: 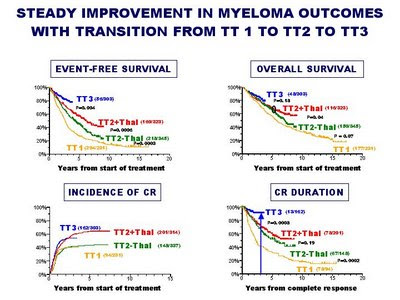 You'll probably want to click on this one. It's good progress, right? 80% of people are still kicking 4 years after treatment begins on Total Therapy 3, and the previous therapies show that after 10 years, the same type of plateau that we see in children's leukemia emerges. If you can stay alive for 10 years, there's a good chance you can actually beat the thing. 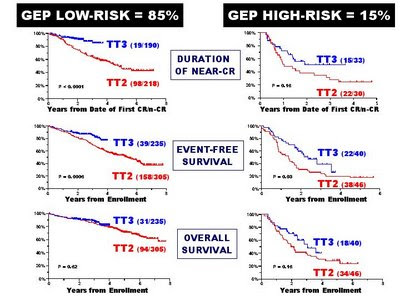 The charts on the left show event-free survival and overall survival for "low risk" patients in Total Therapy 3 (the group which I was so relieved to be part of), while the graphs on the right show the same statistics for "high risk" patients. Among low-risk patients, about 80% have event free survival four years from enrollment in the program, and about 82% are still alive.

The really interesting thing, though, is that these data include deaths from EVERYTHING. In the first two years, there's about a 10% mortality rate. This includes about 5% treatment-related mortality (remember, a lot of folks with this disease are old and this is a brutal treatment regimen). I'm very, very unlikely to fall prey to that. So you can shift all the survival data up 5% for me.

The sum total of this is...I think there's an 80% chance this therapy will cure me.

I just got off the phone with the Chief Medical Officer of the Multiple Myeloma Research Foundation, who hasn't drunk the BB kool-aid but does believe my logic is sound. Like me, she thinks I could consider doing the induction in Arkansas and the transplants in Los Angeles, and I'll discuss that with Dr. SF tomorrow.

Meanwhile, I'm compiling my list of questions for Dr. CS (BB's resident) which I'll hit him up with later this week. Meanwhile, BB's office called telling me I have an appointment with him this Friday -- that ain't gonna work. I'll see if they can do something by phone. Hopefully it's not because of a discrepancy in labs or anything like that...
Posted by Nick at 7:37 AM 3 comments: