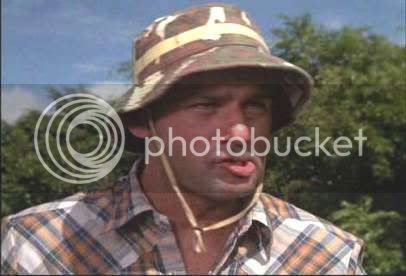 Carl the Greenskeeper once extolled the virtues of Manganese (along with Cinch bugs) in maintaining the grass at Bushwood CC.  I'm not sure what Manganese does, but Magnesium certainly helped with the leg cramps.

I was as scared to go to sleep as one of those teens in the Nightmare on Elm Street movies.  On the advice of the good folks at UAMS, I should go to 800mg a day of Magnesium, but also check Magnsium levels.  I had been taking 400mg before and that seemed to be working; I was getting 500mg of Magnesium from the over-the-counter supplement ZMA, that also has zinc and amino acids in it.

Anyhow, Jill was kind enough to pick up an array of tablets -- 500mg and 250mg.  I took one of each before bed and prepared for the worst.

Nothing.  I slept very soundly.

Last night I took MetaNX and 750mg of Magnesium.  We will see how this works for the next month.
Posted by Nick at 1:47 PM 1 comment:

So as I was up in the middle of the night, posting my blog update below, I also visited the blog of a fellow Myeloma traveler from New Zealand.  After years of enduring this worst this disease has to offer with far more grace than I'd be able to, this person was (finally!) able to be placed on a Revlimid trial and is responding.  I was so happy for him, and I posted a comment on his blow to that effect, and also let him know that should he experience leg cramps, they can be controlled with over-the-counter magnesium supplements.

I haven't had a leg cramp in weeks.

That is, until about an hour after I went back to bed.

At 5:45 I was woken from a dream with a rapidly developing cramp in my left leg (deep in the center of my left calf).  I started to rub it and stretch but it was to no avail.  The pain was excruciating.  And as soon as I recognized it, my right calf got one, too.  It felt like someone was sticking their thumb and forefinger of each hand into each calf, digging in about two inches, and tearing the muscles in two.  In both legs.

I fell out of bed screaming, basically, rolling on the floor for about 30 seconds, and then whimpering rather than screaming for another minute or so.  I woke up my poor wife from a deep sleep and she was a bit spooked given that I was screaming at the top of my lungs!  Fortunately the kids slept through it.

I'm going to track these things more carefully.  I had been using magnesium pills that had been prescribed to me over a year ago when I was in the hospital.  I ran out of those (by design) about four days ago and have gone back to the over-the-counter supplements.  I am gathering that the direct magnesium works better!

So Sid, if you are reading this, take note.  :)    I have heard quinine also works well, but that suppressed platelets, so it's not advisable, unfortunately, unless you've got a much healthier platelet count than mine.
Posted by Nick at 7:20 AM 3 comments:

Had my infusion yesterday at GD's office. I got my test results back from the previous week and they looked pretty damn good. The chemistry was pretty much all in the normal range with the exception of slightly elevated AST and ALT from the liver, owing to a combination of therapy, lipitor and the grape. Probably mostly the grape. :)

I am taking a supplement called Liver.52 (available from Amazon and elsewhere) which has brought the AST down to near normal. The other liver markers (GGTP, alk phosphate and LDH) are all normal. LDH is tracked in active myeloma treatment so to see this squarely in the normal range (reference range is 100-250 and I am 140) is great.

Other markers are also good. Beta 2 Microglobulin, a key marker used in the staging of Myeloma, is around 1.3. Normal is less than 2.5, although i was around 2.3 at diagnosis. At any rate, it is low and that's a welcome sign.

I remain immunofixation negative which is of course the thing I am really focused on. Light chains are all normal. IGA is moving back into the normal range after being suppressed by therapy, and that is a sign of "recovering marrow" per BB so that is all good as well.

Platelets, though, were a different story today. The nurse drew my blood, and gave me the aforementioned labs to review (a victory, since these folks are usually terrible about doing so). When they had analyzed the counts from the blood draw, she came in and said that the doctor was not approving Velcade since my platelets were at 80. I explained that I had taken my last Revlimid for the cycle and that the platelets should be bouncing back, and to please let the doctor know this. Meanwhile I called BB's right arm BJ who confirmed they would not hold Velcade and that the Revlimid is responsible for platelet suppression. I let the nurse know this and asked her to give me the Zometa infusion for which I was due while she presented my case to GD.

She came back in and said GD had approved the Velcade, which I got. As I was leaving the office, I bummed into GD and he noted he "almost did not approve it". Frankly, had he not, I would have insisted he speak with BB but if that failed as well, I would be taking my business elsewhere. This stuff is $5,000 an infusion -- they are getting paid well to execute BB's instructions and since it is my health that is being impacted, they better do so.

My instinct at the time of choosing somebody for maintenance therapy was that i wanted somebody who believed in the protocol that was being followed. My instincts were totally correct and this is a good example of where it might run into trouble. For a doctor who doesn't believe my therapy is curative, they are likely to be much more cavalier about the Velcade. For one who believes it IS curative, they recognize how critical it is to follow the protocol. I am sure had i stuck with SH, there would have been no Velcade yesterday.

As evidence by the time of this post, the dex is at it again. I am going to get a couple of hours of sleep now before work rears its ugly head. :)
Posted by Nick at 3:55 AM 9 comments:

Alive, well (minus another chest cold), busy and apologetic!

Just wanted to drop by with no particular news other than to point out that I'm still here!   I have been buried in work, attempting to sell one of our assets while also preparing for our annual strategic planning offsite with our board.  Both of these things should come to a head soon and I can hopefully resume my project here whcih is the long-delayed posting of my detailed labs.  I do think this will be of interest to people now that (thankfully) the day-to-day of my care is mostly pretty boring.

I have managed to get sick yet again.  The provenance of the cold appears to be my adorable two-year-old.  It spend twelve hours as a sore throat, a day as a sinus infection and now is residing in my chest just like the many predecessors over the past six months.  I'm not sure what can be done other than to hit it as early as possible with Tamiflu and Augmentin (anti-viral and anti-biotic, respectively) and hope that takes care of it quickly.

I have tried to get back into exercise, mostly just light jogging / walking.  I regret not taking steps to keep in better shape throughout treatment -- my broken back probably had something to do with that, actually.  But some of it is also just the massive tiredness that sets in with chemo.  My suggestion to those going down this path is to do everything you can to keep your energy and metabolism up.  With the chest cold, I'm going to have to curtail it again, unfortunately, but hopefully that will pass soon.

I'm very sorry to have been so long between posts, and I thank all of you again for following me!
Posted by Nick at 10:08 AM 2 comments: