Good news from today's doctor visit, returning to work, and other stories

First of all, thank you for the emails, comments and other communiques about my return to work. Day two is over now, and it's been great so far. Of course, frankly, if I wasn't basking in abundant good will from my other "cast members" (as we call them) on my first day back after being out sick for eight months, it would be a pretty bad harbinger. So I expected yesterday to be a really good day -- and it was. :) But I am very excited to be intellectually engaged in something other than hematology, and it feels great to be plugged back in. I got a nice note from our CEO, and everybody else has been warm and fantastic.

I had my infusion appointment and visit with Dr. GD today. I like GD a lot, and I appreciate that he is following BB's instructions to the letter, essentially, minus a little push back on lab frequency. But he is short, not to say taciturn. I feel rushed with him, and there is little effort to answer questions or provide labs, etc. Arkansas is much better about this. Fortunately, I know what to look for. He would have just said "everything looks good, you're doing great" and sped out of the room. But thankfully I was able to briefly flip through and see the all important note:

And just how awesome? Well, as the kids are saying, let me "drop some knowledge on you".

Here's the latest published data from Arkansas. The "tag line" at the top of the page speaks for itself. 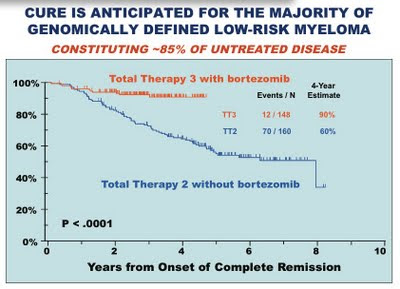 Consider that nobody else believes it's even curable...and yet cure is now anticipated for the majority of low-risk patients!!!

Look at that red line. Over 90% of patients that achieve complete remission remain in complete remission more than four years out. I told this to to GD today and he shook his head and muttered "that's amazing" under his breath. Before he basically ran out of the room to see another patient, that is. :)

I am in complete remission. Not all low-risk patients achieve it, as you may recall. But about 60% do, and I'm in that group, which means I now have the highest degree of likelihood of long-term remission. And as we know, long-term remission equals cure in the Arkansas protocol.

I am sitting pretty on that red line, and I'm gonna stick with Velcade, Revlimid and Dex for as long as I need to. One thing I'll consider is that Revlimid is used out here by Dr. RV, one of the folks with whom I would have consulted early on but for the fact that I had already decided what to do, for as long as the patient can tolerate it. I might ask BB what he currently thinks is best for people. He uses more Velcade now than he used to do...and the results in that chart reflect less Velcade than what I will be on. So if anything, I hope to do even better. I am also mindful that I have the nasty subtype of the disease, which gives me a little less confidence than would otherwise be the case. I will ask BB if he wants to increase the Velcade by 30%, as he once mentioned, with this in mind. We want to see those bones heal up, too.

But basically, I'm optimistic that I'm cured. And I'm so thankful, again, for the early diagnosis, and the time to do research, which led me to BB and the belief that for the newly diagnosed, low-risk patient, there is simply no better alternative.

Every time I speak of how well I'm doing, I think about my friends with the disease -- both those I've met in Arkansas and elsewhere, and those I've met from around the world through this blog -- that have not fared as well. For these people, I once again offer my prayers and profound respect, and also the hope that regardless of where we all are in our treatment, there has never been more hope for Myeloma patients than there now is. Carfilzomib, Pomalidomide, and new trials offer exciting new therapies that have been shown to be effective where other treatments have failed, and which have fewer side effects than current therapy. Do not lose hope, people. Do not give in to this disease. I know it is easier said than done. But I also know that steeling yourself to be relentlessly positive in the face of this disease is the best ingredient you can bring to your treatment.

Love to you all,