A chip in the Chinese Wall...and other stories...

So yesterday was the Fine Needle Aspiration of the tumor deep in my right hip, along with ANOTHER bone marrow biopsy (which I had hoped could be done with the same hole but no, of course not, it wound up being in my left hip, which now means my butt is killing me no matter how I try to sit down).

I went to the hospital at 7AM for an 8AM procedure, ready for bear. At the slightest indication that they weren't going to properly anesthetize me, I was going to get up and walk out. I was taken back into pre-op, where I put on a fetching gown opening at the back, and laid down on the gurney. I spoke with the admitting nurse and she indicated that I was going to be given sedation, and I made sure that it was Propofol in addition to Versed, and she said that was the case. So far, so good.

So now, I waited for what seemed likely to be an inevitable and perhaps poetic reunion with Dr. CAH (not his real name or initials), who some readers may recall was thoughtful enough to interject his personal religious observations in a conversation before beginning a surgical procedure on me. The door cracked open and I was ready to greet him with a smile and hope that he'd forgotten the whole incident.

Instead, a very nice young lady came in and after asking me my name, introduced herself as a secretary. She said she had been doing some research...and asked if I wrote a blog.

"Yes, I do write a blog...and come to think of it I had some less than pleasant things to say about Dr. RVH so I'm sorry -- "

Fortunately, she cut me off and said it was no problem, that she enjoyed reading the blog and found it helpful, and that she was reading it on the down-low. All good news. :) If you're reading this right now, HELLO and congratulations again on your engagement!

Anyhow, with that near-scare out of the way, the usual parade of anesthesiologists, nurses and assistants came through, along with the doctor that would be performing the FNA, a nice woman whose name I have forgotten. CAH must have been out sprucing up the billboads between here and Schmemphis. Anyhow, she explained that the PET scan indicated there was no longer a lesion in the hip, and that there were no "hot spots" that she could read -- although the hastened to add that she isn't qualified to read a PET scan. She said there were several "warm spots" but nothing that looked like a full-blown focal lesion. She said the MRI indicated there was still a hole in the bone where the lesion used to be (I wondered to myself if this was from the previous FNA!) so she would still be taking marrow from that area. This seemed fine to me as BB clearly wanted to monitor the change in that one spot.

Obviously, the initial read of the PET scan is a positive, so I'm happy about that.

Anyhow, it all went as it should have. I got wheeled into the CT room, rolled off the comfortable stretcher on to an uncomfortable CT bed on my stomach, and fell asleep. I woke up in the recovery room, fairly groggy but not in much pain. After 30 minutes, we were ready to leave. The nurse offered me the choice of a Vicodin or a Percocet. Vicodin doesn't do anything for me (I'm resistant, I think, to opiates which is why it required the really nasty stuff to cut the pain when I was in the hospital back in March) so I went for the Percocet because I'd never had it before. It was like trying another flavor at Baskin Robbins, I suppose.

Anyhow it worked pretty well. We had lunch at our favorite Mexican place, and then went home to crash for a few hours. We had a pretty nice dinner and then bumped into BB at the restaurant in our condo lobby. He patted my belly a few times (HE's the one that put me on he Dex, dammit!) and gave Jill a hug. He commented that my hair was coming back, which it is -- although as I have remarked to a few people, I am one hockey mask away from being Jason Voorhees. 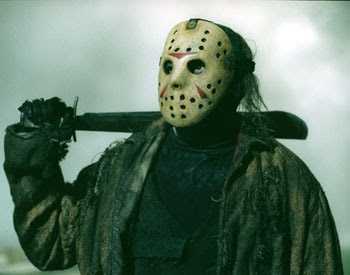 Anyhow, I asked BB if my hair was going to fall back out and he said "probably not."

That's good, I suppose...except of course it raises the question again of "am I getting enough poison?"

All in all, mixed signals, mostly good, I suppose -- PET scan shows the treatment is working, hair may stay (who cares in the grand scheme of things), hopefully next phase of treatment gets rid of the remaining Myeloma. We shall see.

In any case, the Chinese Wall has a crack in it. I'm counting on the nice secretary in Interventional Radiology to keep this between us! :)
Posted by Nick at 4:27 AM 4 comments: