A break from Myeloma...some cooking exploits!

Because it can't always be about cancer...and because, dammit, I'm very proud of what I pulled off last night...

One of my favorite chefs is Michael Mina, and his flagship restaurant in San Francisco is one of my favorites in the world (he also has played a major role in bringing fine dining to Las Vegas and his restaurants there are top notch). When the wife and I went to Michael Mina in February, we came home with his cookbook.

This cookbook is pretty aggressive...the whole restaurant there is organized around the concept of "trios" where a particular type of food, whether an appetizer, main course or dessert, is prepared and then served three different ways in small portions. This means, of course, three times the preparation time. Plus the recipes themselves are quite involved...each of the three preparations might have, in addition to the actual food itself, two kinds of sauces and two or three additional little things with it.

I do, however, love a challenge. And I enjoy cooking. In some ways, it has the same appeal to me that tinkering with a chemistry set at age 10 did: you pour a bunch of stuff together, it fizzes, changes colors, smells different, and then you make somebody eat it!

So when Jill gave me these special plates for Father's Day that have three little divided compartments and which are tailor made for this "trio" concept, I knew I had to give it a shot.

The cookbook itself is one of those that is beautiful to look at but IMMENSELY complicated and not put together in a sensible way. For example, there will be literally ten things that all need to be prepared in parallel, but there is no information about how to sequence them. The book also does things like, in a very time-sensitive recipe where panic is setting in, say "add one tablespoon of sauce X that takes 6 hours to make and which I haven't mentioned yet." I spent literally four hours on Sunday transcribing the recipes from the cookbook and trying to make some sequence out of them, and made my shopping list. On Monday morning I shopped, and I started cooking at 3:30PM. I was in constant motion until the main course was served at 10:45PM. So literally seven hours of cooking for probably ten minutes, at most, of eating. Not sure about the tradeoff...

Anyhow, here's what we ate. 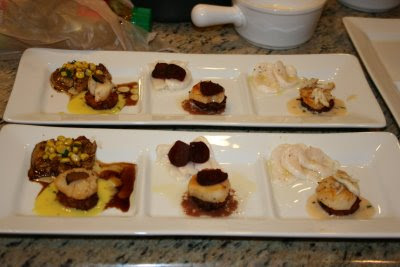 Left to right, the first was on a corn tarragon pudding, with black truffle, with scallop ceviche in black truffle vinaigrette and truffled corn compote. 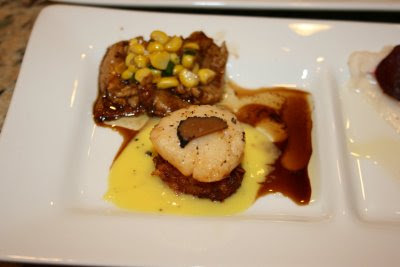 The second was on a red beet beurre rouge sauce (the only sauce that broke, dammit!) with scallop ceviche in champagne wine vinaigrette and beet garnish. 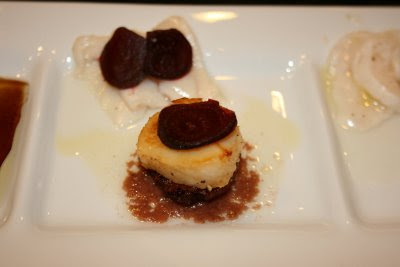 The third was on a beurre blanc sauce with lobster and scallop ceviche in lemon marinade. 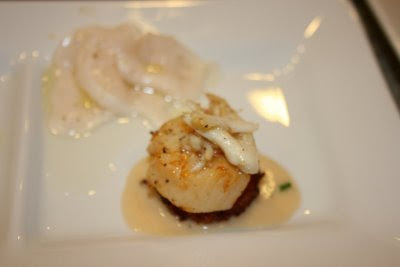 This third preparation also calls for caviar to be put on top of the ceviche and on top of the lobster bits, but I can take it or leave it, the wife doesn't really like it, and even I have to draw the overkill line somewhere -- buying a tin of the stuff in order to use 1/2 a teaspoon for two people would be completely egregious.

For the main, we had butter-poached prime filet in pinot noir reduction, again served three ways. Frankly, while an interesting preparation it wastes a LOT of butter and it could much more easily be made by cooking a steak on a flat-iron skillet (my preferred method). Nonetheless, it was tasty. It was supposed to be "real" medium-rare; it probably came out medium which I wasn't thrilled about but it was still good. 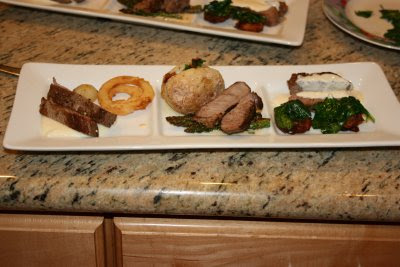 Left to right, the first preparation was on a bed of horseradish mashed potatoes, with baked cippolini onions and buttermilk onion rings. 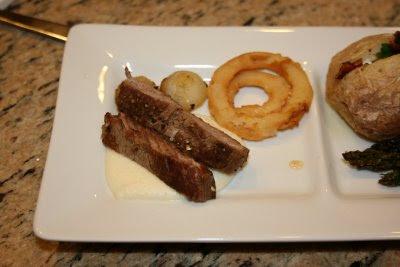 The second was on a bed of bernaise sauce with broiled asparagus tips, served with salt-baked yukon potato with tarragon butter, creme fraiche, fresh bacon bits and fresh-cut chives. 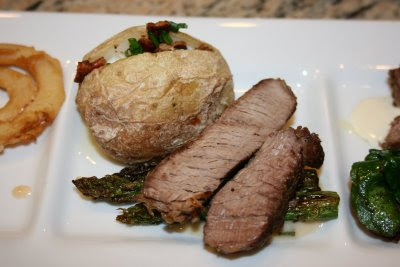 The third was with miniature potato cakes and garlic-wilted fresh spinach, served with horseradish cream sauce. 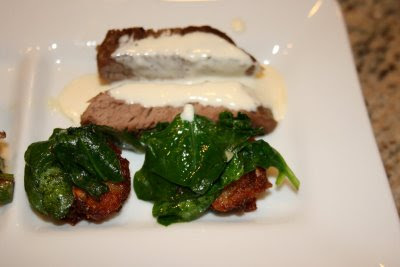 This third treatment in the book calls for a foie gras reduction as well, but I'm ethically opposed to foie gras, and I don't like the taste of it either...so nuts to that.

Not pictured in the steak preparation is the pinot noir reduction itself, which I forgot to pour until after the pictures had already been taken (but I was terrified another sauce was going to break so we needed to eat quickly and I didn't have time for more pictures).

Needless to say...I hope they don't run cholesterol numbers when I hit the doctor's office this afternoon. I plan on speaking with Dr. SH to keep him abreast of what I've done and where I am in treatment. I expect he will tell me that BB's program is overkill, that all the testing is overkill, and that maintenance therapy is overkill...although SH is good enough to note that others disagree with him on the latter point, in particular. I'm very appreciative that SH, even though he disagrees with BB's protocol, told me to investigate him.

Hopefully, I will have good news from the lab draw last Friday. As it turns out, I'd been taking a little too much of the Thalidomide (oops!). I'd been taking 200mg a day, which is what they do during chemo, but during "bridging" therapy I'm only supposed to take 100mg a day. I've cut it out completely, but I will resume it tomorrow at 100mg and see what happens.

One last thing re: the cooking last night...a picture of the chef, about to do battle with multiple butter-based sauces. 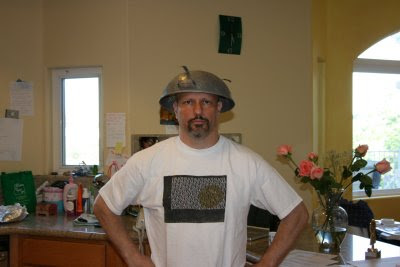