Reflections on the Eve of Maintenance

So the blissful eight weeks without cancer therapy ends tomorrow. It's another moment for reflection on the path I've chosen. A year ago, when I began this journey, few other doctors believed in maintenance therapy. Now, more are getting on the bandwagon, as they believe it's critical to keeping the cancer away for a longer period of time. But only BB and his team (with the possible exception of his disciple in Utah) believe in maintenance therapy of the type he is prescribing as part of an active plan to kill the disease once and for all.

I'll be on Velcade every Tuesday, Revlimid for 21 days out of every 28, 20 mg of dex on every Tuesday, and then once a month Zometa and Testosterone, but those aren't as big a deal.

When I explained this maintenance regimen to Kathy of the MMRF, she noted that it is all semantics but this is aggressive therapy. And indeed that is true. For most doctors, this is probably more or less the cocktail that they would use to get rid of disease that is running rampant -- with a few changes in the cadence, perhaps. But for me, in a body that has such low levels of the disease that they are not detectable by the most sensitive tests done, I'll take this cocktail for the next three years with the hope of killing every last rogue cancer cell.

It's both daunting and trivial compared with what I've been through -- but I have something of a sense of dread nonetheless. Some of this comes from that damn portacath, which hurts, still. I don't even want them using it tomorrow, flushing the line, anything -- I just want it out of me, once I talk with people that access them all the time and who can tell me if this was placed too deep, or incorrectly, or try to describe why it hurts so bloody much.

Absent a large pile of nickels for dramatic effect, want to see what $325 looks like? 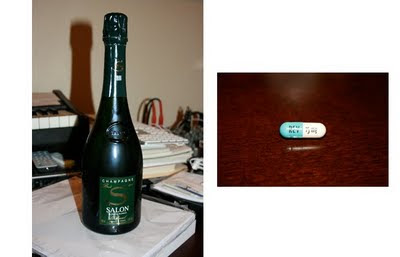 On the left, is a bottle of Salon champagne, one of the most rarified and expensive Champagnes in the world (Dom Perignon is nothing next to this stuff). It's from 1996, which is one of the best modern years of Champagne. It is the type of thing that one drinks to celebrate being cured of cancer -- if one has a bottle of it, one is very lucky and it's unlikely I'll ever have too many more in my life.

On the right, is a single 15 mg pill of Revlimid. Much less enjoyable than the Salon, with side effects that are much more dire than simply the warm feeling and love-of-all-mankind that is typically brought about by a few of glasses of wine. And I must swallow 21 of these pills a month for the next three years.

The same amount of money. One consumed for enjoyment and celebration if one is very lucky, maybe once or twice in one's lifetime. And the other taken more days than not for the next three years to ensure that one is alive to enjoy the Champagne. A perversely symbiotic relationship, it seems.

Something is wrong with this picture. But in contrast to where you think I'm going with this, what is wrong with the picture is not that Celgene is making a lot of money off that pill. In a few years, it will be generic and nowhere near as expensive. In the meantime, Celgene needs to earn a profit on the research it invested in this pill, which will save my life. I have to take the lousy pill to make sure I'm around to enjoy the Champagne -- and the pills are making up altogether too much of my future, while the Champagne will have to wait until I am six years out on BB's curve, and thus cured. Fortunately, it's ageworthy.

I guess my point is, I wish life was more about Champagne and less about pills. But on the other hand, a lot of this is about state of mind, and every day that includes pill-taking is still a gift of another day. So thank God (and Celgene, particularly if you are a scientific atheist) for that little marvelous pill nonetheless! And thank God, regardless of whatever flaws exist in our healthcare system here, that my insurance covers Revlimid for newly diagnosed patients. I will not politicize this blog, but I will point out that NHS in the UK does not permit Revlimid in newly diagnosed patients. Likewise, there is a very good man who reads this blog in New Zealand, and he has been through several years of hell with his Myeloma, which has battled back despite being put into remission from previous treatment. This man deserves Revlimid, and Pomalidomide if needed, and Velcade, so that his disease can be shut down again. And it's not that easy. As I understand it, Velcade isn't covered.

This disease is hard enough to contend with without having to worry about access to treatment -- and so my prayer and positive thought for the day is that all people suffering from this disease, regardless of where they live or what type of healthcare system they live in, have access to treatments that will relieve their suffering and restore their health.

As for me...I'm glad to take that pill, and I'll be even more glad to drink that Champagne when the time comes. But for tomorrow, I am trying to steel myself for what I anticipate to be a series of administrative blunders and ineptitude, interrupted by what will be, I am sure, a great meeting with Dr. SF. More to come after that!
Posted by Nick at 9:12 PM 7 comments: