Sorry to take so long with these, folks, but I've had to dig around for some of the data. Once I got to Arkansas I was pretty meticulous (with the help of my lovely wife) at keeping this data organized, but pre-Arkansas and sometimes in between treatment phases I was a little less consistent.

What I hope to do with these graphs is provide some useful information for patients going through therapy, as well as interesting data for the curious. If statistics aren't your thing, skip over the stuff. I'm erring on the side of providing more information rather than less.

The first graphs are of the monoclonal protein spike, the bad protein generated in my blood by the Myeloma. Most MM patients secrete this protein in their blood; some do not, however. This protein is an "immunoglobulin" that the immune system creates in response (or in preparation) for an invader in the system that needs to be killed off. Normal protein matches these immunoglobulins against specific invaders and there is a spectrum of diversified proteins in the blood to deal with the myriad invaders. Monoclonal protein is one specific protein that is replicated out of control, and it is useless to the immune system -- worse than useless, in fact, since it crowds out the useful stuff.

It was through observing an elevated total protein number in my routine labwork that my original primary care physician suspected something was wrong. The reason the total protein was elevated was because there was all this evil protein kicking around in my blood. It was about half the protein in my blood, in fact, at diagnosis.

These are all measured in grams per decileter, by the way.

The first graph shows the total protein over time from the "pre-diagnosis" draw at my hematologist -- a couple of weeks before the bone marrow confirmed that I had myeloma -- and has the dates of my various therapy treatments superimposed.

If you "doubleclick" on the graph, it will open in a bigger window so you can see it better, by the way. 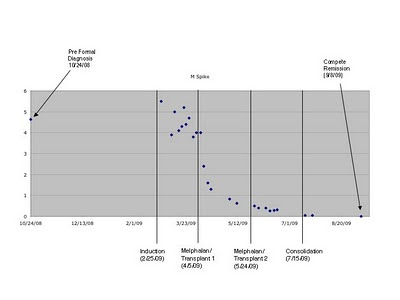 This second graph focuses more closely on the treatment phase only -- this makes the trendline easier to observe. 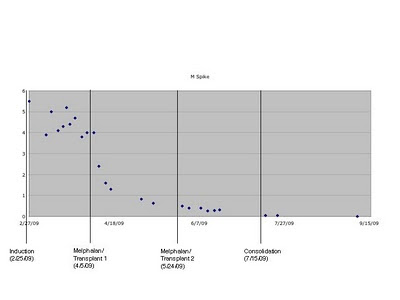 This graph is useful for a couple of reasons. First, you can see the smaller measures more clearly. And second, you can observe the way the protein is reduced by therapy. It is reduced logarhythmically...which means it looks like a bit of a weird curve on the linear graphs above but actually appears linear -- that is, a pretty straight line over time -- on the log scale chart. I've superimposed a line here so you can see what I mean.

I realize that this last bit is probably overkill for most, so I apologize!!! 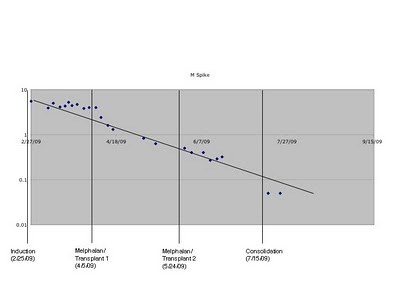