I awoke this morning after anxious dreams to learn I had been transformed into a giant cockroach.

With apologies to Kafka, I should have it so good.

I went to bed last night and barely got any rest. We are still working through the logistics of the kids and that's very, very difficult for us all, especially Jill who is such a doting mother that separation is just gut-wrenching. We got through noodling some potential solutions there at around 1AM, which I figured would be good timing since I get about four hours out of sleep out of Dilaudid and Ativan. Sure enough, I woke up around 5AM and had the usual battery of blood draws and tests done.

I had met yesterday with a doctor from anaesthesiology to get consent for the procedure. I hadn't yet met with the doctor doing the vertebroplasty but I wasn't that concerned. However, now I'm to the point of being wheeled out of my room having received my good-bye kiss from the antiobiotic IV and still I haven't spoken with the surgeon.

In the pre-op room, we learned (1) they originally had me scheduled to replace my Cook catheter with a Quinton catheter (very interesting since we were doing the OPPOSITE!) and (2) I actually have FOUR compression fractures in my vertebrae...not just the two that we'd been told about. T4 (or 5?), T10, L3 and L4. I was a little unnerved by these late developments...but I was also unnerved by the fact that the anaesthesiologist couldn't decide whether or not to put me totally under general. After arguing for so long on so many procedures for MORE sedation, it was odd to feel nervous about the amount I would be getting.

Anyhow, sooner or later everything got taken care of and two hours later I was back in my room. They changed out the catheter correctly, and did something on my back because I AM IN FREAKIN' AGONY HERE!!!!!! The good news is I am able to cough without feeling like my back is going to split in half, so I don't need to worry about pneumonia. The bad news is my back is KILLING ME. I am hopeful, and there is a good deal of precedence for this, that it will improve overnight...provided I can actually get some sleep. Before the surgery, I would find a reasonably comfortable position (say pain = 2 on a 10 scale) and hang on as long as I could before it began to deteriorate, ending in a coughing fit and pain of say, 7 or 8. Now I am a constant 5. No relief...no respite.

Jill says the swelling in my back has gone down and that's a good sign...so hopefully tomorrow will be a fresh start, a new day, and all that happy horses**t =. :)

We'll find a way. One way or another.

Thanks to all for your continued support!

Gregor the sentient cockroach, signing off. 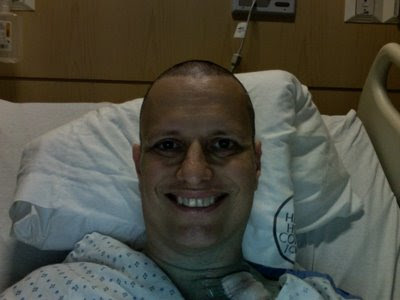